skip to main | skip to sidebar

What did you say?

Let’s get one thing straight!

“Words are downright sneaky and cannot be trusted!”

With all the languages, dialects, dialectics, expressions, colloquialisms, cultural and regional pre-conceptions, interpretations, abbreviations, presumptions, prefixes, suffixes, acronyms, paradigms, metaphors, trans-literation, not to mention distractions and pre-occupations (Oops…I mentioned them)), to which we are exposed daily (and nightly), is it any wonder that some times we presume too much?

Communication is a difficult exercise, even with your own family (who should know you……by now!)

In fact, the only fact that we all totally agree on is that

Under the powers vested in me as an Erisian Pope,

I, Pope ME-THAT-IS-NOT-YOU!! (The Ineffable)Arch-Deacon of the church of "The Latter-Day Paints",Founder of "The cabal of The Seventh Day Adventurers" not excluding "The Darlington LLamas", Keeper of the flame of eternal twilight, "Guardian of the Di-Agnostic Spirit" including the sacred rite of "Di-Agnostic Spirit Fingers","Progenitor of Eristic Inversion" and "Eternal Erisian Toy-Boy",
hereby ex-communicate all Popes not ordained by this cabal, for a period of five days as from this date at midnight GMT.
(In order to rework the Erisian Church entirely, removing echos of "The curse of Grayface" which have been revitalised by the recent monetary normalization occurring across the planet as well as by the failure of the Cern Undertaking and also because I think its a funny thing to do.)

Please note: All popes affected may apply at the head office for de-excommunication after that period, but may be refused without consideration.

Make sure to enquire about innoculation against future outbreaks of the Grayface virus.

Reminder From The church of Latter-Day Paints

Celebrating our 30th year of freedom from Lead.
Glorifying The Grand Release: The totally erisian triumph over the Ancient Aneristic Paint Monopolies (AAPM) and their attempt to limit human intellectual development by adding lead to paint and resulting in the founding of "COL-DP"
NEVER LICK YOUR PENCIL!!!

How much lead dust is dangerous?
It doesn’t take much. If the sugar in a
one-gram packet of sugar were lead dust,
it could contaminate one hundred
kitchens, 10 feet by 10 feet. The Centers for
Disease Control estimates that a piece of
lead as small as a grain of sand is enough
to poison a child.

Video of my moment of Papal ordination. This is also the origin of your ordination if you haven't yet read the last post. Complete ordination can only occur when the right hemisphere of your brain screams "enough!" and agrees to share reality with the left hemisphere. ( This has been described as compus nullis and should not be confused with enlightenment)

Robert Anton Wilson (The Eristic Prophet and Sage)
at 5:14 PM No comments: 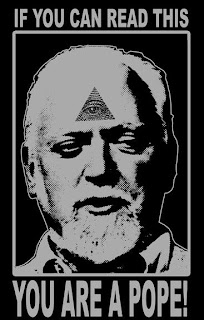 Discordianism is a modern, chaos-centered religion founded circa 1958–1959 by Malaclypse the Younger with the publication of its principal text, the Principia Discordia. It is widely regarded as a parody religion, and has been called "Zen for roundeyes", based on similarities with absurdist interpretations of the Rinzai school. Discordianism recognizes chaos, discord, and dissent as valid and desirable qualities, in contrast with most religions, which idealize harmony and order. The religion is largely composed of whimsical and absurd ideas, though many adherents claim there is a deeper meaning to their flippant attitude. Eris is the matron deity of the religion. (and also the name of the new 10th planet of our Solar System!)

Like it or not, you've just become a Discordian Pope by seeing this image. And now have the power to name anyone you wish a Pope as well. You are infallible! Maybe!

Discordianism
Religions have Dogmas: established beliefs or doctrines held by a religion, ideology or any kind of organization, thought to be authoritative and not to be disputed or doubted. While in the context of religion the term is largely descriptive, outside of religion its current usage tends to carry a pejorative connotation — referring to concepts as being "established" only according to a particular point of view, and thus one of doubtful foundation. Discordianism only has Catmas: which are relative metabeliefs ;p

It is difficult to estimate the number of followers and correctly identify Discordian groups. This is because of the anarchist ethic that pervades Discordianism, which is reflected in the encouragement to form schisms and cabals. Additionally, few adherents hold Discordianism as their only or primary faith. Instead, Erisians tend to adopt Discordianism as a complement to other faiths.

The Principia Discordia contains the Law of Eristic Escalation. This law states that Imposition of Order = Escalation of Chaos. It elaborates on this point by saying that the more order imposed the longer it takes for the chaos to arise and the greater the chaos that arises. This can be read as an argument against zero tolerance and hard security, or just a statement about the world.

"Consult your pineal gland" is a common saying in Discordianism. Some Discordians seem to regard the pineal gland as the source of answers to life's most difficult questions. The pineal gland is believed by some, such as Dr Rick Strassman (read this book DMT: the Spirit Molecule), to produce trace amounts of DMT (dimethyltryptamine), a psychedelic chemical which is believed to play a role in dreaming and other mystical states. It should also be noted that the pineal gland was also used in Descartes's explanation of Cartesian Dualism as the "seat of the soul" and the connection between the material and immaterial world. In some cases it is referred to as "the atrophied third eye". It has also been suggested that the third eye (Ajna) physically resides at this location between the two hemispheres of the brain.

The most famous tale of Eris recounts her initiating the Trojan War. The goddesses Hera, Athena and Aphrodite had been invited along with the rest of Olympus to the forced wedding of Peleus and Thetis, who would become the parents of Achilles, but Eris had been snubbed because of her troublemaking inclinations.
She therefore (in a fragment from the Kypria as part of a plan hatched by Zeus and Themis) tossed into the party the Apple of Discord, a golden apple inscribed Kallisti – "For the most beautiful one", or "To the Fairest One" – provoking the goddesses to begin quarreling about the appropriate recipient. The hapless Paris, Prince of Troy, was appointed to select the most beautiful by Zeus. Each of the three goddesses immediately attempted to bribe Paris to choose her. Hera offered political power; Athena promised skill in battle; and Aphrodite tempted him with the most beautiful woman in the world: Helen, wife of Menelaus of Sparta. While Greek culture placed a greater emphasis on prowess and power, Paris chose to award the apple to Aphrodite, thereby dooming his city, which was destroyed in the war that ensued.

Read the Principia Discordia if you can withstand enormous amounts of laughter, FNORD?!
at 6:50 PM No comments:

There's a lot to be learnt from a snail. They always move forward. They are nomadic, carrying their single dwellings with them. They never backtrack. They lay a one use, one way path that vanishes with the next  dew or rainfall. They love children and gardeners. They are inquisitive and vigilant and always hungry. They are pacifists. They are sovereign entities that live and die without contemplating wars, macro-economics,  or exo-politics. They never sign, resign or design yet remain totally significant.
They are however adept at quantum mechanics but they never discuss that.
(They must never be confused with their antitheses....Slugs who are just plain revolting, disgusting creatures that delight in being trodden on by humans and particularly enjoy being squished between unsuspecting toes. Even other slugs hate slugs. Some botanists have gone so far as to claim that slugs are in fact proof of the "Anti-Snail" but so far no-one has agreed with them.)
at 1:00 PM No comments:

The Musings of Pope Me-that-is-not-you!! (the ineffable)

No musing is better than non-musing.
The former lacks form and the latter can't form. However the former contains the implied essence of future form while the latter implies stasis.
at 5:32 PM 2 comments:

Dont Copy mine!- Get your own!